Appleton, WI – The Fox Valley Symphony Orchestras (FVSO) is delighted to announce Dr. Kevin Sütterlin renewed his contract as Music Director for another three years, starting with the 2022-23 season. 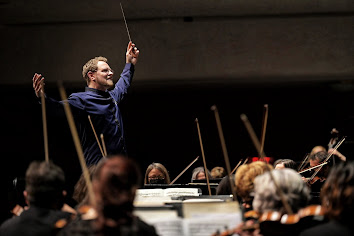 Sütterlin became music director and conductor of the ensemble in 2019 after the departure of Brian Groner, who had been with the orchestra for 25 years.

FVSO musicians received the news during their March concert cycle, and Concertmaster Yuliya Smead commented, “His musicality and enthusiasm is contagious, and he makes rehearsals and performances incredibly enjoyable. Kevin creates a unified ensemble while still respecting the individuality of each player. I am really looking forward to many years of wonderful music making under his baton.”

“Kevin has an innate sense of how to guide the orchestra to their best performance while also telling a story to our audience with each piece,” says Executive Director Jamie LaFreniere. “His focus on diverse composers and guest artists allows us to make everyone feel represented and welcome as he continues to build bridges through music. It has been wonderful to see people respond to him on the stage, in the hall, and in our community.”

“In his short tenure, Kevin has demonstrated remarkable leadership,” says Mike Lokensgard, FVSO Board President. “The ensemble has rarely sounded better, and his selection of repertoire has been exactly what we need to attract a new generation of audience members. We are lucky to have him and are eager to see and hear what the Symphony will be able to achieve over the next three years under his guidance.”

Dr. Kevin F.E. Sütterlin is an internationally sought-after conductor and pedagogue. He belongs to Beyond Artists, a coalition of artists that donates a percentage of their concert fees to organizations they care about. He supports “WIRES” (Australian Wildlife Rescue) and the “Memphis Music Initiative” through his performances.

Sütterlin is Director of Orchestral Activities and Opera at Concordia College, where he and his colleagues received two EMMY awards for 2016’s nationally broadcast Concordia Christmas Concert productions. The Concordia Orchestra won the prestigious American Prize competition in 2018-19 under his leadership. Sütterlin is Music Director of the Fox Valley Symphony Orchestra since 2019 and Co-Music Director of Sinfonietta Memphis since 2014, an ensemble that provides free concerts and educational experiences for the Greater Memphis communities. Perhaps the only orchestra in the U.S. with a co-music directorship model, Sinfonietta Memphis’s conductors Dr. Mathias Elmer and Sütterlin proudly represent the orchestra’s credo: friendship through music. They also co-direct The Sinfonietta Academy for Historically Informed Performance Practice which was recently recognized as one of the country’s leading period performance practice institutes. In 2019, Sütterlin was named Principal Guest Conductor of the Qingdao Concert Hall Symphony in China, and in 2021 Honorary Conductor of K-Classic Orchestras, a Korean organization dedicated to contributing to world peace through musical and cultural exchange. With a great love and passion for teaching, Sütterlin is also Artistic Director of the Northern Valley Youth Orchestras and holds The Phyllis and Richard Duesenberg Endowed Orchestra Chair of the Lutheran Summer Music Academy and Festival, directing the organization’s orchestral and conducting programs.

Considering himself a “citizen of the world,” Sütterlin has been building musical bridges across four different continents and has led his ensembles on many successful national and international tours. He has performed and taught across the globe including Austria, China, Germany, Greece, Italy, Romania, Slovenia, Switzerland, and the United States. He has taught at Shanghai Conservatory, Sichuan Conservatory, University of Cape Town, University of Hawaii, Lucerne Conservatory Switzerland, University of Memphis, and Virginia Tech University. Highlights of his upcoming guest conducting season include engagements with the National Opera of Chile Chamber Orchestra, Namibia National Symphony Orchestra, Brescia Music Festival Italy, Fargo-Moorhead Opera, and Arizona State University. Sütterlin received his doctorate and master’s degrees in orchestral conducting from The University of Memphis and a bachelor’s degree in conducting from the Hochschule Luzern-Musik, Switzerland.

About the Fox Valley Symphony Orchestra: