Local arts groups collaborate to bring masterwork to the PAC

Carl Orff’s Carmina Burana has become a classic for musicians and audiences because of its percussive music, hypnotic melodies, lilting passages and all-out, robust orchestration. On Saturday, May 3, more than 200 regional musicians will collaborate to present this classical masterwork in live performance at the Fox Cities PAC.
The rowdy subject matter is set to some of the most beautiful melodies in classical musical literature. The Carmina were songs of medieval traveling students and ex-monks who left universities and monasteries to pursue a roaring life of gambling, drinking and making love. The texts of the songs were discovered in a Bavarian monastery near Munich in the early 20th-century and are a mixture of 13th-century Latin and “low” German. The songs in the Carmina cover a range of topics, as familiar then as they are today: the fickleness of fortune and wealth, the ephemeral nature of life, the joy of the return of Spring, and the pleasures and perils of drinking, gluttony, gambling and lust.
The performance culminates the Fox Valley Symphony’s 47th season and is a favorite of Music Director Brian Groner. “There is something wonderfully primal about the text and the music of Carmina Burana,” Groner said. “When it speaks of power it is bold and over the top aggressive; when it talks of love it is either bawdy or exquisitely tender.”
According to newVoices Artistic Director, Phillip Swan, the masterwork is a welcome collaboration with the symphony. “Choral/orchestral collaborations provide a cross-pollination of musical interests,” Swan said. “Consequently, it’s good for the community to have arts organizations working together to put on quality productions.”
For singers & instrumentalists alike, Carmina Burana is a musical challenge because of the range of emotions needed to interpret the composer’s music. One movement requires repetitive, full-voiced singing and playing while the next movement requires a gentle, lyrical approach.
“It takes an unusual amount of concentration to maintain the rhythmic intensity Orff demands in the score, and because it is repetitive it can be physically challenging,” Groner said. “It’s a big sing,” Swan said. “The melodies are present an extreme of emotional singing requiring consistent vocal technique as well as artistic interpretation.”
Singers in the Lawrence Academy of Music Capriccio Girl Choir in grades 5-7 are excited for the opportunity to sing with a full orchestra, professional soloists (one of whom is a girl choir alumna), and an adult choir. “The girls are learning to listen to how their part fits into the other vocal and symphonic parts,” said Director of the Lawrence Academy of Music, Karen Bruno. “Singing with an orchestra allows them the opportunity to hear different timbres with their ‘accompaniment.’ The girls are used to hearing only the piano, with occasionally one other string or wind instrument, while they sing.”

A FAMILY AFFAIR
For the Hodges family, the performance will be a reunion. Father Mike Hodges is a founding member of newVoices where he sings with his son, Jeremy. Daughter Jennifer Hodges Bryan is an oboist with the symphony and brother Jonathan is a cellist. The family shares a long history of music and fostering musical development.
“We gave our kids outlets for enjoying music,” Mike Hodges said. “They all started in violin and in time gravitated toward their own choice of instrument,” he said. His wife, Donna, drove the kids to lessons at the Lawrence Academy of Music and checked their practice progress.
Jeremy Hodges says the opportunity to perform together is a normal part of a musical family. 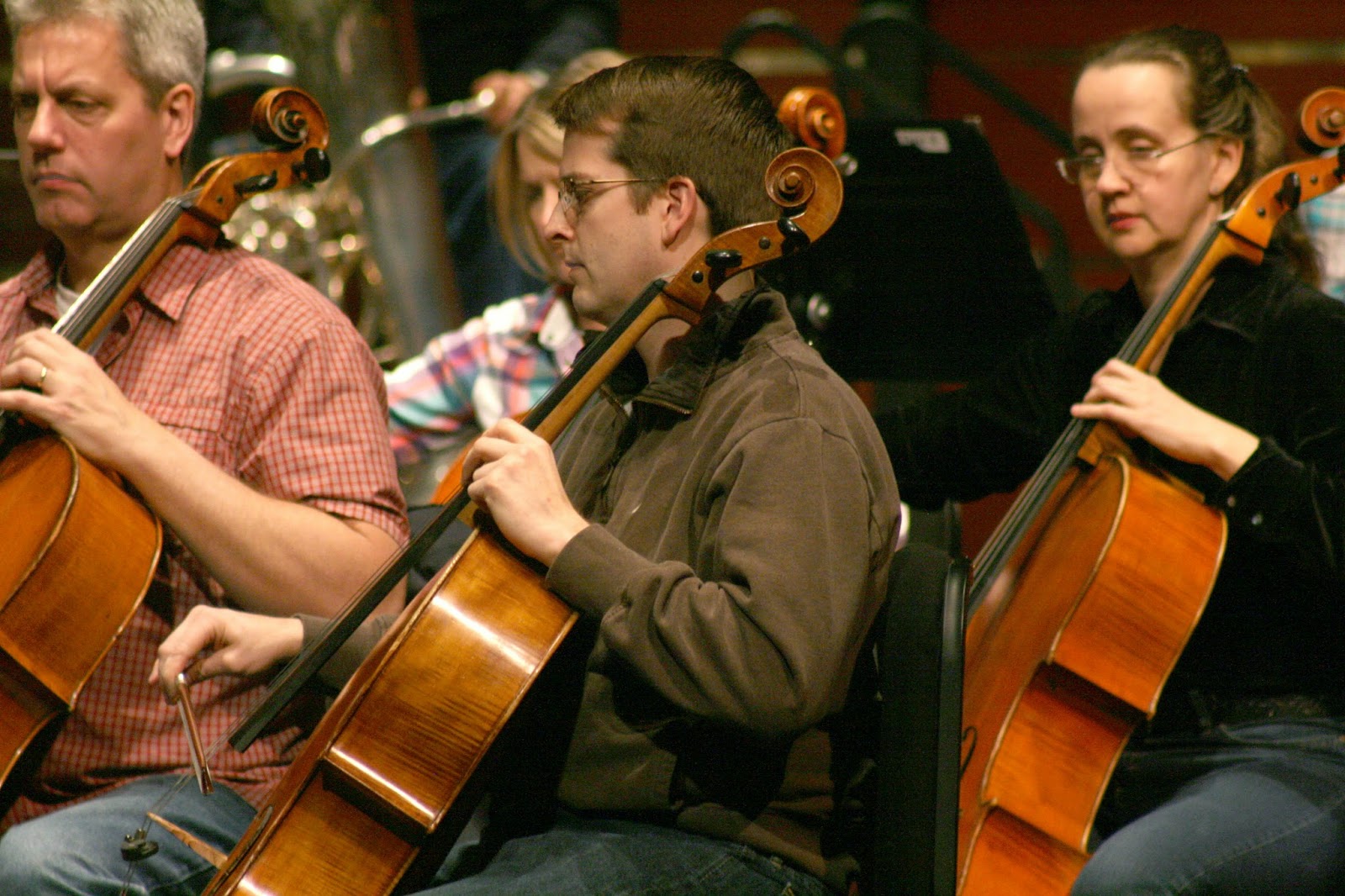 “But in the end it does have a special personal meaning: the people I care most about are with me and sharing the fun,” he said.

His father agrees. “I get such enjoyment from performing and to be able to have them on stage with me doubles the enjoyment. There is a sense of pride in watching their accomplishments,” Mike Hodges said.
Jonathan Hodges says the different roles family members play allows for unique perspectives. “I am more toward the front of the stage, Jennifer is in the middle, my father and Jeremy are toward the back and my mother is out in the audience. Every spot does sound quite different and can expose different aspects of the performance,” he said.
Family members are continuing the tradition as Jennifer Hodges Bryan has her three daughters enrolled in music lessons. “Having them learn an instrument and involved in music is something that I really wanted for them because I think there are several benefits to a child's development when they are involved in music,” she said.

HEAR IT LIVE
Both conductors urge area residents to experience the work live, rather than listening to recordings. “You can’t reproduce the sound of 200 musicians live by putting it in a little speaker and expect it to sound the same. Hearing this music live is worth unplugging,” Swan said.
“Some of the greatest pieces of western civilization's art music combine the forces of chorus and orchestra,” Groner said. “There is a power in them that is greater than each standing alone.”
Concert information is:

- Written by Mary Schmidt of newVoices
Posted by Jamie at 11:07 AM No comments: