Beethoven at The Core!

Our maestro is very excited to start our Beethoven cycle, and what better way to start than at one of our community concerts for just $10? We want to share this music with everyone in our community and we hope you can join us at The Core on March 1.

The music is joyful and enthusiastic, and EXACTLY what we need as we enter spring after two rather stressful years. We can't wait to celebrate this music with you.

Our very own Erik Leveille from our violin section is also happy to share some notes on the piece. Erik writes program notes for our Ovation books at the Fox Cities Performing Arts Center for our season concerts, so we are honored he took some time to do the same for our community series. 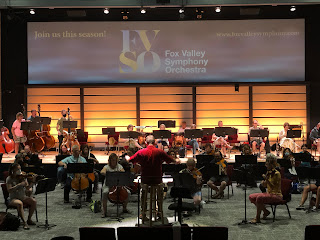 Forget all of the images of Beethoven that come to mind- the tragically deaf genius, ill-tempered and mannered, shaking his fist at fate and the universe- when approaching his optimistic and confident 1st symphony. Beethoven was not quite 30 in 1799 and 1800 when he composed it in Vienna, having escaped a miserable home life in Bonn in 1792 to study with Franz Josef Haydn. He had previously attempted a symphony in 1795 but abandoned it, mindful of the towering examples set by his teacher and the departed Mozart, instead steadily building up a collection of outstanding works, including his Op. 18 string quartets and the “Pathetique” piano sonata. When he set his pen to composing a symphony again in 1799, it came much more easily. The work was premiered in Vienna in April of 1800, along with works of Haydn and Mozart.

The introductory Adagio molto begins with a witty harmonic joke that escapes modern ears; woodwinds and pizzicato strings intone a series of chords in the “wrong” key, and there isn’t a “proper” root position C chord (C in the bass) until a downward rush of notes in the violins introduces the crisp, martial theme of the Allegro con brio (this theme features six C’s in four measures and ends with a C major arpeggio, just in case we didn’t get the joke) which unfolds in standard sonata form with some Beethovenian touches- brusque sforzandos and highly independent use of the woodwinds. The lyrical second theme is ingeniously accompanied by an arpeggiated figure that echoes that of the first theme. An energetic development section is followed by a recapitulation that states the first theme in a vigorous fortissimo rather than its initial piano. The surprisingly brisk Andante cantabile con moto seems to be a loving homage to the Andante moment of Mozart’s 40th symphony, as the first theme echoes the rhythm and imitative voices of that masterpiece, albeit in a much lighter and insouciant tone. Delicate punctuation from the trumpets and timpani add unusual color and Beethoven continues his harmonic adventurousness by modulating to the remote key of Db, a ploy he will revisit in the following Menuetto. The Menuetto, a whirlwind Allegro molto e vivace, sets off with a rising scale that will feature prominently in the final movement. More harmonic surprises are in store as Beethoven veers into Ab and then Db major before lurching back into C, where he sets up a tug of war between the notes Db and D natural. The much calmer Trio features a repetitive theme in the woodwinds accompanied by liquid eighth notes in the strings. The finale opens again with a joke; after a grand chord, the violins tentatively climb up a scale, adding one more note each time, before rocketing up the scale all at once inn a brilliant mirror of the first movement, thus beginning the Allegro molto e vivace that bubbles with Haydnesque wit and energy. The development features more bold harmonic changes and brilliant counterpoint, and the recapitulation and coda bring this early masterpiece to an exuberant conclusion.