We are excited to share this performance with you from our April 2022 concert at the Fox Cities Performing Arts Center. Music Director Dr. Kevin Sütterlin leads the full Fox Valley Symphony Orchestra in their season finale, which started with this amazing piece. 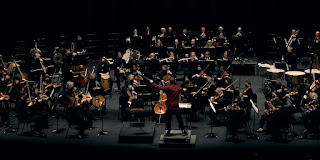 "Fòs Nou" is a Haitian Creole title that translates to "Our Strength". This composition by Christopher Ducasse for the Full orchestra was commissioned by Dr. Kevin Sütterlin and April Ann Brock as a gift to the Fox Valley Symphony Orchestra, in honor of Prof. Dominique-René de Lerma.

Fòs Nou is a mixture of western European classical music and Haitian Folk Rhythm. The core rhythm of Fòs nou is the "Yanvalou". Yanvalou, a Rhythm, and Dance of Haiti get its name after its associated movements. It is one of the most important rhythms in Haitian folklore, it is sometimes linked to "Knowledge", "Patience", "Healing" and "Strength".

With a combination of epic sound and Yanvalou, Fòs Nou expresses the strength and power that we can demonstrate when we work together. All the good we can bring to the world, and all the greatness that we can achieve. Inspired by the National Mantra of The Republic of Haiti which says "L'union fait la force" (Unity is Strength).

A native of Port-au-Prince Haiti, Christopher attended Holy Trinity Music School where he learned voice, violin, and piano. Christopher became a member of the Philharmonic Orchestra of Holy Trinity in 2007 and conducted their main choir "Les Petits Chanteurs" for three years beginning in 2011. He was a BLUME HAITI Scholar in the Haitian student exchange program at Lawrence University in 2015, and in 2017 he joined Silver Lake College of the Holy Family to get a Bachelor in Choral in Music Education. Christopher is currently getting a master’s in music in Choral Conducting at McGill University in Montreal, Canada.

Christopher was the Winner of the WCDA Conducting Competition in 2018. He has also composed vocal and instrumental pieces that have been performed by various groups, most notably Petits Chanteurs and the Philharmonic Orchestra of Holy Trinity Music School, the Lawrence University Cello Ensemble, and the Silver Lake College of the Holy Family Chorale. Christopher sings baritone, in addition, to play piano and violin, and does some photography as a hobby.