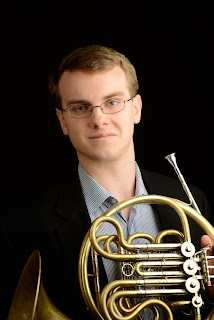 We don't always go over the top bragging about our fabulous guest artists, but this time, we really need to make an exception! This weekend, our guest artist is Austin Larson. He is a fine player and he's won many awards (see below), but, even better, he is one of our own! Austin is from right here in Neenah! And still better, Austin was a member of our own Youth Orchestra! We are all so delighted to have him come back home for our Opening Night concert this Saturday!

I talked with some of Austin's teachers, so you could get a little more background on this extraordinary young man:

Don Krause: Don is our favorite horn teacher in the area. Not sure how we got lucky enough to have him teaching our students, but we are certainly glad we can count him as a friend. We currently have six horns in the Youth Orchestra, and Don is coaching all of them!

"Of all the students I ever had, Austin had the most focus and drive of any. A lot of  students practice, but they either don't have focus or don't have the drive. Austin was always trying to improve his performances, even in his lesson assignments. He managed to memorize every solo that he played for solo ensemble year after year. Practice makes perfect was his constant motto! I have had him work with a lot of my students as he has become more successful and is always willing to take the time to help young students improve."

Bruce Atwell: Bruce is our Principal Horn for the Fox Valley Symphony and also teaches at the University of Wisconsin - Oshkosh. He works with our board, staff and youth orchestra students to help make improvements across the board.

"When Don first referred Austin to me as a freshman in high school, my first impression was that he was going to become a once in a generation horn player. His sense of musicianship was already well developed from years of playing the violin and his horn technique was solid and seemed effortless. This raw talent combined with an amazing work ethic pointed to a long and successful career as a musician. His attitude still amazes me. He is still so humble and grateful for all of the success he has achieved. He still calls or texts his former teachers to let us know how he is doing. I can't wait to see where he ends up."

Lynn Lichte: Lynn was our program director for Youth Orchestra while Austin was a student. She was an amazing asset to the symphony and our Youth and Education program. She has since retired, but we miss her every day!


"It was my great pleasure to know Austin Larson while I was the manager of the fox Valley Symphony Youth Orchestra program.  He was not only a gifted young musician, but a true leader in the orchestra.  This fine young man received the coveted Youth Symphony "Leadership Award" during his senior year and went on to win numerous honors and accolades both nationally and internationally as an amateur and now professional musician.  I believe that I can speak for the entire Fox Valley Symphony Youth Orchestra program in saying that they are proud to claim Austin as one of the brightest and best of their alumni and are thrilled to see him return as the guest artist to open the new concert season!"

We can't wait to have Austin on our stage again this Saturday! It is always a treat to work with talented guest artists, but when it is one of our own students who we've watched grow and succeed, it is a rare gift that we will all cherish!

Be sure to get your tickets here!
You can also read the full program notes on our website.

Here is a copy of Austin's bio, so you can be as impressed as we are!

Neenah native Austin Larson has gone on to become one of the most successful young hornists of his generation. A graduate of Neenah High School, Austin was a member of the Fox Valley Youth Symphony for five years and studied with current and former FVSO hornists Bruce Atwell and Donald Krause. Austin has since developed one of the most impressive competitive track records of any hornist. Austin is one of only two people to ever win First Prize in both the University and Professional Divisions of the International Horn Competition of America and has also won First Place in the International Horn Society Premier Soloist Competition, the Yamaha Young Performing Artists Competition, and the Wisconsin Public Radio Young Artists Competition. On the international stage, Austin was also most recently a finalist in the Jeju International Brass Competition in South Korea. Austin has also appeared as a soloist at many prestigious venues, including the Music For All Symposium, International Horn Symposium, Jeju International Wind Ensemble Festival, Wisconsin Public Radio, and with orchestras in both the United States and South Korea.

Currently living in Denver, Austin holds the Assistant Principal Horn position with the Colorado Symphony and has previously held the Second Horn position with Symphony in C in addition to summer positions with the Verbier Festival Orchestra in Switzerland and Spoleto Festival Orchestra USA. Austin holds degrees from the University of Cincinnati College-Conservatory of Music (CCM) and the Curtis Institute of Music and his primary collegiate teachers include Jennifer Montone, Jeffrey Lang, Randy Gardner. A strong believer in music advocacy, Austin has also been involved with numerous charitable organizations, including Appleton-based Horns a Plenty Christmas and has raised funds for music scholarships both at the University of Cincinnati and in the Northeast Wisconsin area. For more information, visit www.austin-larson.com.